Beside my awful experience yesterday with cats chasing me, I had a good night sleep, and I was able to wake up at 5:45, called a taxi (11 euros) and be at the Wadi Aqaba Jordan Border at 6:30.

By having a european passport we were able to apply to the 3 day visa at the border. To cross it you have to: 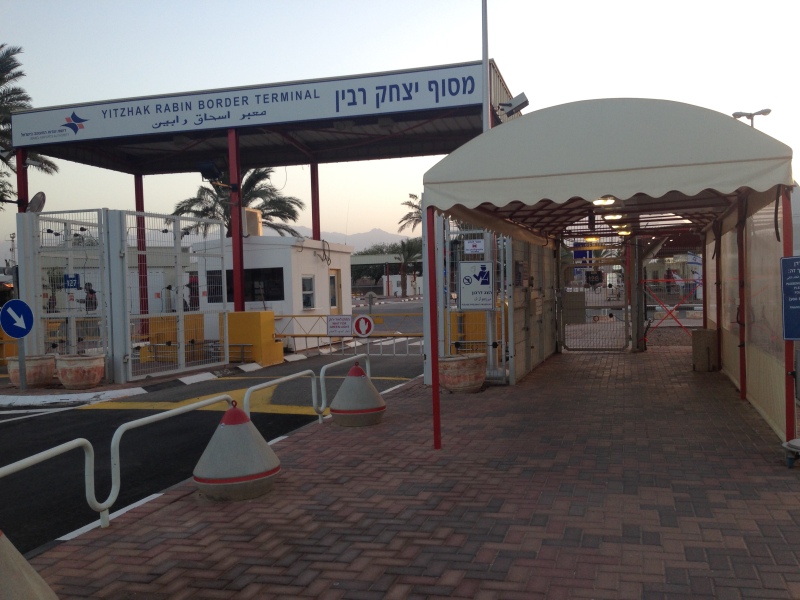 We were finally in Jordan at 7:30, where we took a taxi to our hotel. Driver was really nice, as most of the Jordanians we met.

All the taxi drivers said the price is fixed to 55 JOD to go to Wadi Musa (where Petra is), and our driver told us he was available to pick us up the next day for 40 JOD to go back to the border. We didn´t have Jordanians Dinars (their currency) therefore we ended up paying him 100€ and we´ll pay him the other 30€ tomorrow.

2 hours later we were in our hotel: Petra Palace Hotel (60 euros per night) and ready to visit Petra.

Our hotel is 5 minutes walking from Petra, how nice and how excited I am to finally be in this site, my fifth official new Wonder of the World.

We paid 100 euros for 2 days tickets plus Petra by night. Petra is a real wonder, but keep in mind that most of the sites are very apart from each other, so no way you´ll get to see all the sites in one day, or even 2 days. We almost made it in 2 days, but we walked like crazy.

Petra is more than two thousand years old, although it is not known precisely when it was built, but the city began to prosper as the capital of the Nabataean Empire from the first century BC through trade in frankincense, myrrh, and spices. Petra was later annexed to the Roman Empire and continued to thrive until a large earthquake in 363 AD destroyed much of the city. The earthquake, combined with changes in trade routes, eventually led to the downfall of the city which was ultimately abandoned. By the middle of the seventh century Petra appears to have been largely deserted and it was then lost to all except local Bedouin from the area. In 1812 a Swiss explorer named Johannes Burckhardt set out to “rediscover” Petra. He dressed up as an Arab and convinced his Bedouin guide to take him to the lost city. After this, Petra became increasingly known in the West as a fascinating and beautiful ancient city.

Petra is known as the rose-red city, a name it gets from the colour of the rock from which many of the city´s structures were carved. The Nabataeans buried their dead in intricate tombs that were cut out of the mountain sides. The city also had temples, a theatre, and following the Roman annexation and later the Byzantine influence, a colonnaded street and churches. Many of the structures and monuments, including the Treasury, have been remarkably preserved to this day.

Here is a map I borrowed from http://www.tourplanisrael.com.

(3) Al Siq, with the Treasury in front

The Treasury, or “Al Khazna” in Arabic, is the most spectacular monument carved by the Nabataeans. It stands an imposing 39,5m high and is impressively carved out of a single block. The monument´s name comes from a local Bedouin legend that pharaoh hid a treasure in the urn at the top, and you can see bullet holes from shooting at the urn to try to retrieve this treasure.

In reality it is a mausoleum and would have been used for funerary purposes; many archaeologists believe it is the mausoleum of King Aretas IV (9 BC – 40 AD).

The facade of the Treasury reveals a Hellenistic influence…In the center of the facade is the goddess Isis, and she is surrounded by dancing Amazons (female warriors) with axes over their heads. At the top of the steps just before you enter the chamber, there are circular holes in the floor which were most probably used for sacrifices. 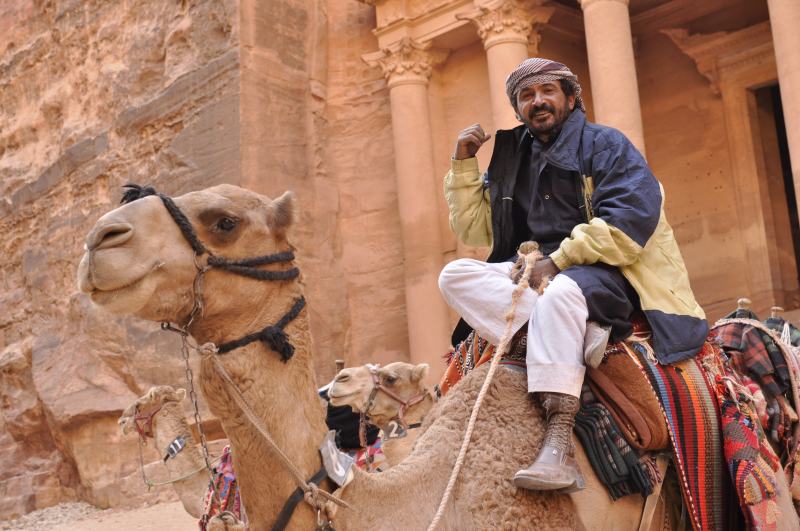 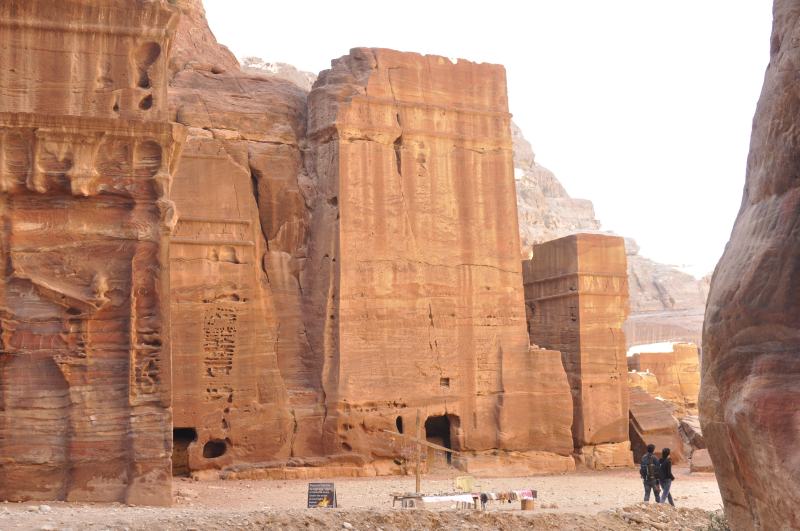 (5) Street of Facades: This is the name given to the row of monumental Nabataean tombs carved into the southern cliff face; the facades are crowned with corner crow-steps, pilasters and cavettos.

(6) The Theater: carved into the side of the mountain at the foot of the High Place of Sacrifice, the theatre consists of three sections of seating rows separated by passageways. Seven stairways ascend the auditorium, which can accommodate 4000 spectators. The back wall of the stage was rebuilt by the Romans when they later occupied Petra. 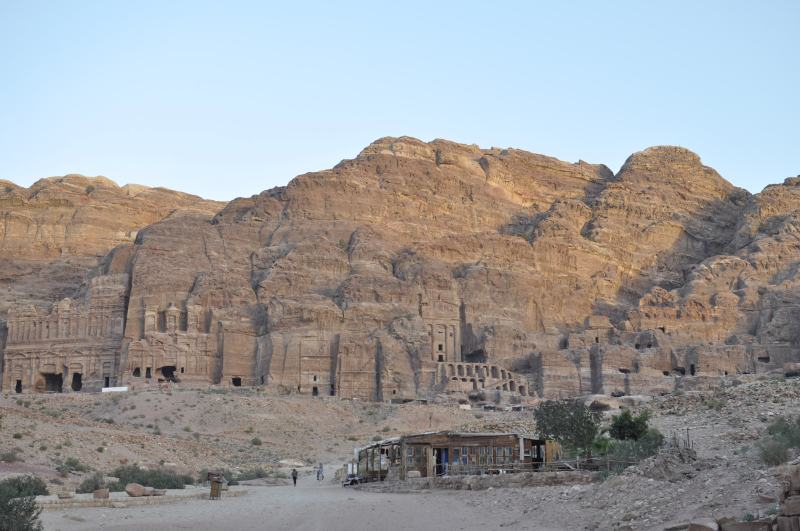 Besides the famous “Treasury” our goal today was to reach the amazing Monastery, which we did, and also met some friendly Jordanians in the way that recommended us to keep up walking a little bit more after the Monastery to get to a viewpoint and enjoy some tea with the locals. 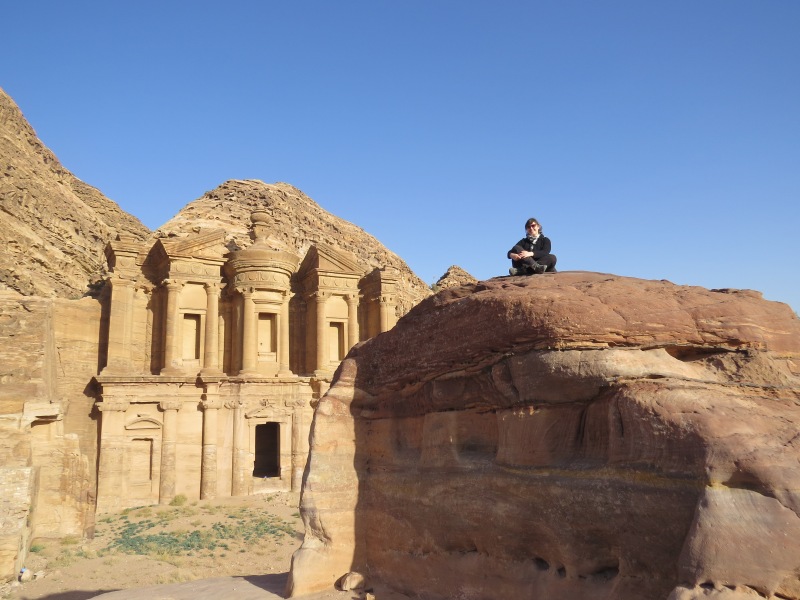 (24) A´Deir (The Monastery): It dates to the early second century AD, during the reign of King Rabel II. The Monastery was modelled on the Treasury, but the bas-reliefs that can be seen on the Treasury are replaced here by niches to house sculptures. This space was used as a biclinium for the meetings or religious asoociations. The hall was later re-used as a Christian chapel and crosses were carved in the rear wall, which is how the sculpture got its name. 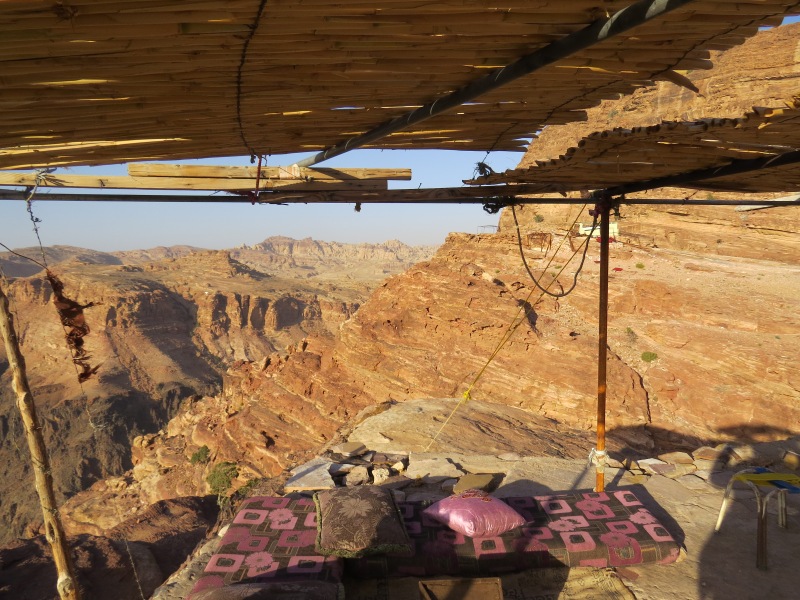 On our way back from the Monastery

At 16:00 we realized we have to start our way back to our hotel because the way is long, especially to us that stop every 5 meters to take pictures, sadly it was already dark after 1 hour.

We took a quick shower and went to a restaurant we booked in the morning. A special restaurant, where a chef indicates you step by step how to cook your own delicious Jordanian meal, and then eat it with the restaurant´s manager. Also we where lucky enough to be the only ones in the restaurant. We loved the experience (48 euros each) at Petra Kitchen restaurant.

From the restaurant we went straight to enjoy Petra by night that started at 20:30. Candles all the way from the entry to the Treasury, bedouin music and tea to welcome us. Beautiful. They turned on the lights for 10 minutes, and besides one cat that was wondering around, this was the only disappointed part, to see all the people getting close to the Treasury to take selfies and standing in front the lights. Anyway, take into account that the show runs every Monday, Wednesday and Thursday of each week. We found this on time before planning our itinerary.

Back to “Israel – Palestine – Petra“

First dose of covid vaccine done at 34 weeks pregnant!!
Washington DC
Oh yes! We are in Detroit, starting our short road trip through part of the NE 🇺🇸
Can you guess where are we?
Feliz aniversario mi gordo-flaco. Como diría mi tío: 2 años que se sienten como 2 minutos...debajo del agua 🤣. Mentiiiiiiiraaaa 💙. #bodasdealgodon
Cerrando con broche de oro. Canyonlands, mejor de lo esperado 💚
Today I visited @archesnps, and I can’t recommend it enough. It’s one of my favorite, so I’ve decided to make a list, in order of preference, of the American national parks I have visited so far:
Yellowstone 💚
I finally posted in my blog the story of our particular and fun wedding in Gibraltar (sort of Las Vegas of Europe). Go check it! (Link in my profile—> Europe->UK)