Arrived on time in Varanasi (4:40am) and our guide was waiting for us very kind at the ramp out of the train. After 30 minutes we were at the Hotel Ramada, where they let us do an early check in and had the breakfast we are not going to have the last morning. Hotel is nice, breakfast was very complete and the rooms looked clean. No free wi-fi. There is a Mc Donalds next to our hotel so the junk food addicts from our group were happy about it.

Manish waiting for us at the train station

With Mahendra (the guy that organized all our trip) we always have one driver and  a companion. In this case the companion, Manish, offered also to be our guide for 2 days and 1700 INR (for all of us). He seems very nice and knows lots of stuff about the city and the religion so we agreed and he put us a “tikka” mark with the colors they use for holi festival.

We arrived 1 day after the holi festival in Varanasi, the Hindu festival of color and spring. The day after they also play with colors but dry, no water. We were kind of sad at the beginning but Manish told us it was better because it could be dangerous for outsiders and we wouldn’t have time to visit anything with the chaos.

Before heading out, Manish explained a little bit where the name of the city comes from: Kashi was the first name, given by the indians, which means “the brightness”. Other of the most common names is Benares given by the muslims. And lastly Varanasi given by the British, which was derived from the two tributaries of the holy River Gange named Varuna and Assi.

According to the Hinduism and Jainism, Varanasi is the most holy city of the seven sacred cities. It is believed by the Hindus that one who dies in the Varanasi will get salvation from the cycle of birth and death (Also known as Moksha) and finally intermingled in to the Lord Shiva.

The Dharmachakra Indo-Japon Buddhist Temple was our second stop. Here we could see  Buddha with Japanese facial features. Also, the Buddha´s statue was lying in Nirvana position. Nirvana is for the Buddhism what Moksha is for the Hinduism, liberation from the repeating cycle of birth, life and death.

Very close to it was the Chinese Buddhist Temple. While we visited this temple, Manish told us the story of Buddha:

When Buddha (563-480 BC) was a child, his father (Suddhodana) and also a Maharaja (Great King), took him to the Astrologer, since Hindus strongly believe in Astrology. The astrologer told him that Buddha was going to become either a king or a saint and that his name was Siddhārtha Gautama. The father was mad because he had only 1 son and he wanted his son to become the next king of the empire. The king decided he will never let his son go out until he becomes a young. So he grew up inside the palace, married at the age of 16 with Yasodhara, his cousin of the same age, and spent his time in the pleasure gardens of the palace. At the age of 29, after the birth of his first child, he decided to go outside the palace. He saw lots of problem, people in pain, so he wanted to know why the sadness comes to our lives, why are they sad. He left his wife and son and went to the forest.

Once in the forest, Buddha cut his hair to avoid being recognized since all Maharajas have long hair to be recognized as royal family. He meditated for at least 7 years, and for a while he sought enlightenment by mortifying the flesh; fasting and eating only one seed a day, he became so thin that his bones stuck out. Weak from hunger, he fainted and almost died. Then he decided that this was not the way to enlightenment. He began to beg for food and concentrated on meditation.

After receiving the enlightenment under the Bodhi tree, he knew why the sadness or suffering comes to our lives and decided to share his experience with everyone. He went to Varanasi and had his first 5 disciples and then gave his first public sermon in Dhamekh Stupa at Deer Park (Sarnath).

1. The truth of suffering

2. The truth of the cause of suffering

3. The truth of the end of suffering

4. The truth of the path leading to the end of suffering

Each of these lessons explains the key Buddhist steps in understanding the truth about life, the reasons behind those truths, the possibility of change and the way of life that can lead to a life free of suffering.

He returned home when his father was about to die. All the people welcome him as a prince, but he said to them he was not a king.

A the age of 85, he became seriously ill but felt that he should not die until he had prepared the order for his departure. Buddha instructed a friend named Cunda to prepare him a meal. Soon after eating this meal, the Buddha became very sick with violent pains. The Buddha declared that Cunda was to be honored as equal to the one who had given him the last meal before his enlightenment. Finally he asked the monks three times if they had any questions, but none of them spoke. Then the Buddha said his last words, “Transient are all conditioned things. Work out your salvation with diligence.” The body of Gautama was cremated a week later, and an argument over the relics of the Buddha was settled peacefully by dividing them into eight portions for royal families and disciples.

After hearing this amazing story, we went to the place Buddha gave his first sermon to his 5 disciples and then saw the Stupa from the outside since entry it is actually to meditate and it´s not for free. 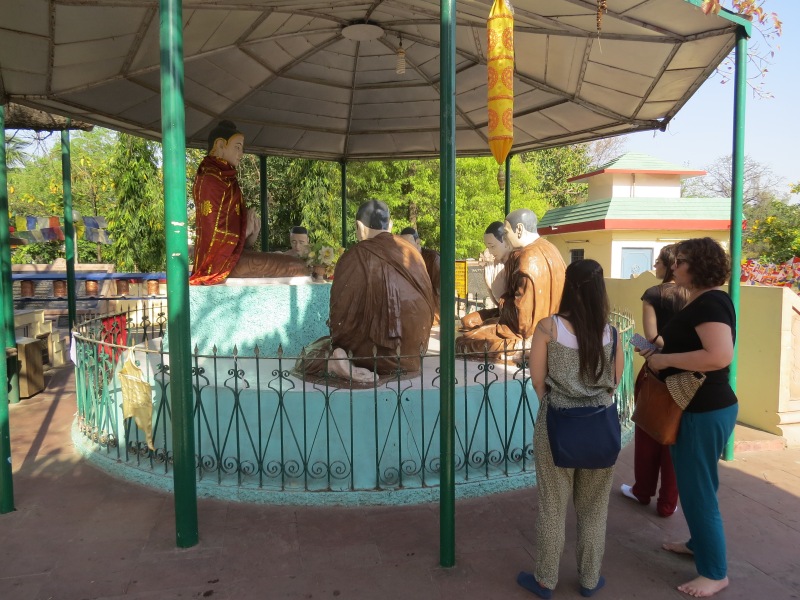 Next stop was the Sarnath Archaeological Museum, is very small but interested. Our guide bought the tickets for us for 5 INR (I think he bought indian residents tickets).

We left Sarnath around 17:30 to go to the old town. Our driver left us as close as possible and then we took a rickshaw to visit the holy Ganges (or Ganga in hindi) to see the grand Ganges Aarti (Lamp Ceremony) on a boat. This boat wasn’t included, but totally worth to see the ceremony from the river instead of on the banks (100INR per person). 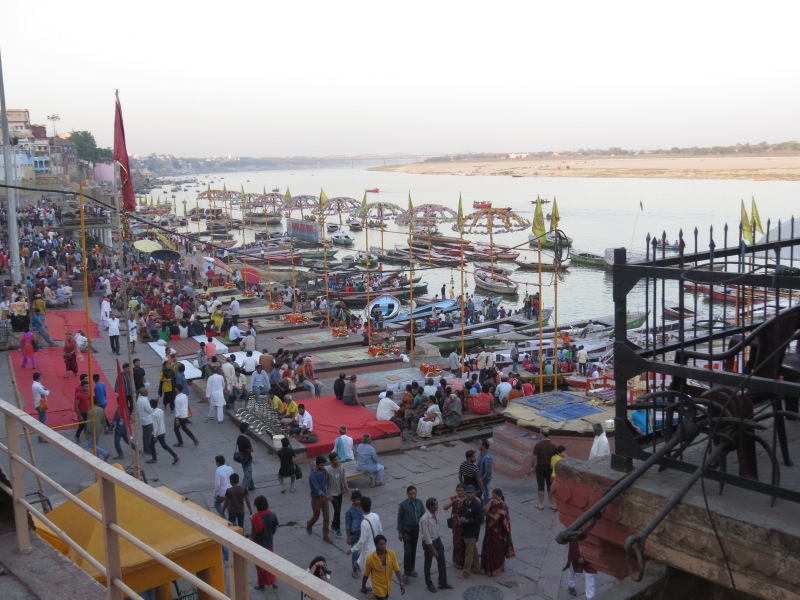 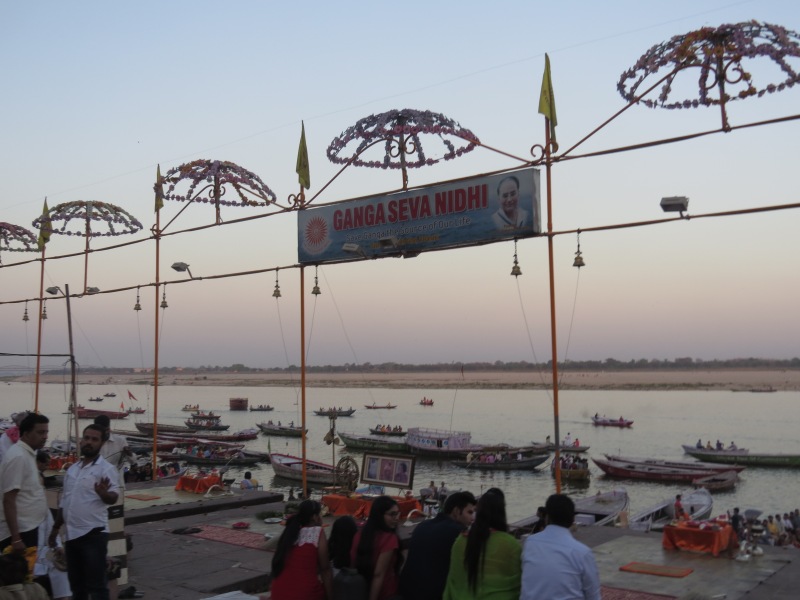 The Varanasi Ganga Aarti takes place every sunset at holy Dasaswamedh Ghat, near Kashi Vishwanath Temple. The aarti consists of a daily “Agni Pooja” (Worship to Fire), perform by a group of priests, wherein a dedication is made to Lord Shiva, River Ganga (the Ganges), Surya (Sun), Agni (Fire), and the whole universe.

People start arriving around 17:00 in order to get a good position for viewing the aarti. The most effective way of seeing it is by boat from the river. Also, many shops in the vicinity hire their balconies out to tourists. We had a boat ride of various ghats before Aarti took place. It was beautiful to see all the small lamps floating in the river and the chanting of mantras. Definitely, a must in India. 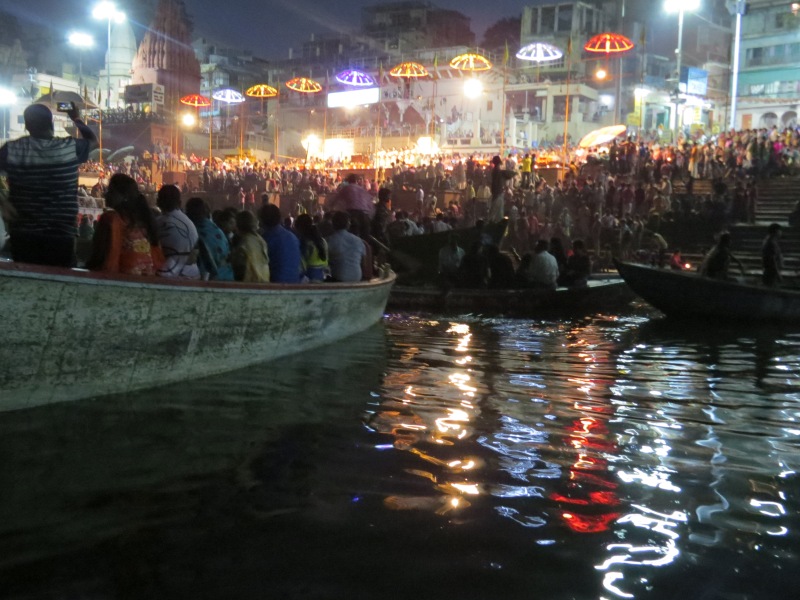 Playing with colors during the holi festival

We took another rickshaw in the middle of the chaos to go back to our hotel, but no before taking a photo of BHANG!

Which is a paste created by grinding cannabis leaves and then mixed in milk, laddoos or pakoras as a special treat with a kick for Holi. Technically, the cultivation, sale, purchase, transportation and importation of cannabis is usually prohibited in India. It, however, only prohibits the consumption of certain parts of the plant. The law allows for the consumption of the leaves of the plant, the exact element used in bhang.

Even though the cultivation of cannabis is also illegal, there is also a second legal loophole: Growing marijuana is illegal and punishable by up to 10 years in prison, but harvesting the leaves that grow by themselves in the wild is allowed.

We are too nerds  to try it,  but at least I took a picture of it 🙂

Back to: “Incredible INDIA”

There is always something “new” to visit in Madrid…today we went on a tour of antique pastry shops and taverns in Madrid with the amazing #ManuelRey. Here is a pic of the oldest pastry shop in Madrid, almost 200 years and an incredible puff pastry that I recommend trying if you are near by.
Fez, Morocco with some mint under my nose
Cinque Terre con la mia mamma y las amigas ♥️
Summer in Greece 🇬🇷
Oporto bonito de mi coração
#Valencia♥️ y papás babeados 🤤
Miami siempre es una buena idea ♥️ #simeganolaloteriabusquenmeenmiami
Disfrutando de nuevo de Madrid ♥️
Back “home” ♥️