Guadalajara is a spanish province full of charming and historic towns, beautiful natural surroundings and where good food and hospitality are other attractions. Specifically the Alcarria is an area of ​​this province plagued by grandiose natural landscapes and a rich historical heritage, such as churches, palaces and civil architecture of different styles.

One of the towns of Alcarria is the monumental Brihuega, on the bank of the river Tajuña, declared Historic Artistic Complex. You can easily plan a day trip to it if you are living in (or visiting) Madrid, which is exactly what we did. Furthermore, at this time of the year (mid July) the blossom of the beautiful lavender fields of Brihuega takes place, which is the main reason for our visit.

Just three kilometers from Brihuega, you will find Cívica, a very special village that will surprise you by being excavated on the slope of a rocky hill. The most incredible thing about Civica is that, to this day, it does not appear practically in any guide and most of the travelers do not know its existence.

How to get there?

Located only 90 km from Madrid, getting to Brihuega by bus or by car is very easy. There are buses that take you from the south of Madrid (Mendez Alvaro bus station) to Brihuega for less than 15 € and last one and a half hour. By car, we have to take the A-2, direction N-II Barcelona, and take exit 73 towards Torija, Brihuega or Torre del Burgo, it took us around an hour.

Our visit to Brihuega

We left Madrid at mid day, and around one hour later we were parking our car very close to the Real Fábrica de Paños (Royal Cloth Factory). Since all the restaurants were fully booked, we had a sandwich in a bar and went to walk around the town.

Its historic center has a fantastic Plaza Mayor, two Romanesque churches of great beauty and a very particular building: the Royal Cloth Factory, whose gardens have been compared to those of the Palace of Versailles. Also, the town was walled with walls of Arab origin, rebuilt in the twelfth century, which retain two of its gates: Gate of Cadena and Arc of Cozagón. Here is the itinerary we did:

La Guia Arc: It was built in the 19th century by General Hugo (father of the writer Víctor Hugo) during the War of Independence (1808-1814), with the aim of opening a hollow through the walled enclosure to conquer the castle of Piedra Bermeja.

Prado de Santa María: located inside the walled enclosure of the castle of Piedra Bermeja and through which it is accessed from the La Guía Arc. It was the ancient courtyard of the Muslim citadel. After the transfer of the Villa to the Archbishop of Toledo, the fortress loses its defensive function happening to be palace archbishop, therefore in the 13th century the archbishop Ximenez de Rada orders to construct the church of Santa Maria de la Pena.

Peña Bermeja Castle: named for the red stone of the fortress that dominated the Tajuña valley. Curiously, the interior of the castle is now the local cemetery. 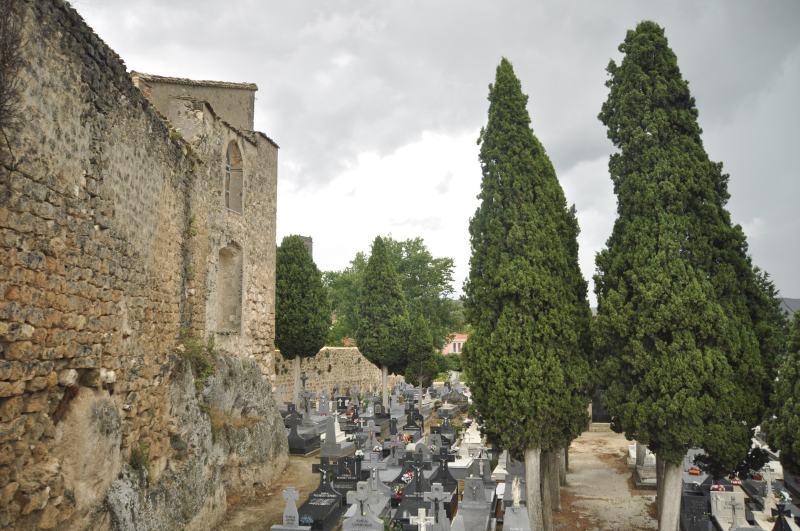 San José Convent (1619): that now houses the Museum of Miniatures of Professor Max, illusionist and natural magician of Brihuega, whose collection includes 65,000 pieces of miniatures of daily objects of different times, in addition to houses of dolls and miniature buildings.

Cozagón Arc: It was the most important gate of Brihuega. It is situated to the south, as access to the road that goes first to the Tajuña river and then to the Tajo river. In this way, it connected with the road that was going to Toledo.

Coso Square: the main square of the town.

Brihuega Town Hall: Renovated in 1975, replacing the old one from the 18th Century.

The old Royal Prison of Carlos III (1781): It was used as a school and academy of music. In 1984 a reform was carried out in the interior with the purpose of adapting it as a library; now houses the Brihuega Tourist Office. 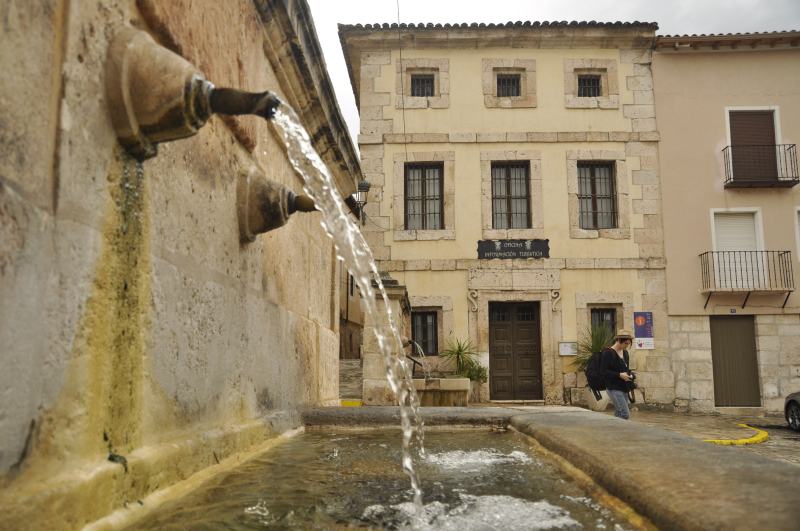 Arab Caves: They are a labyrinth of galleries and tunnels that cover the entire subsoil, with a length of approximately eight kilometers. Used in times of siege, through them they had an escape route outside the walls. It has a constant temperature of 12ºC throughout the year, hence they were used as a food storage in the past. 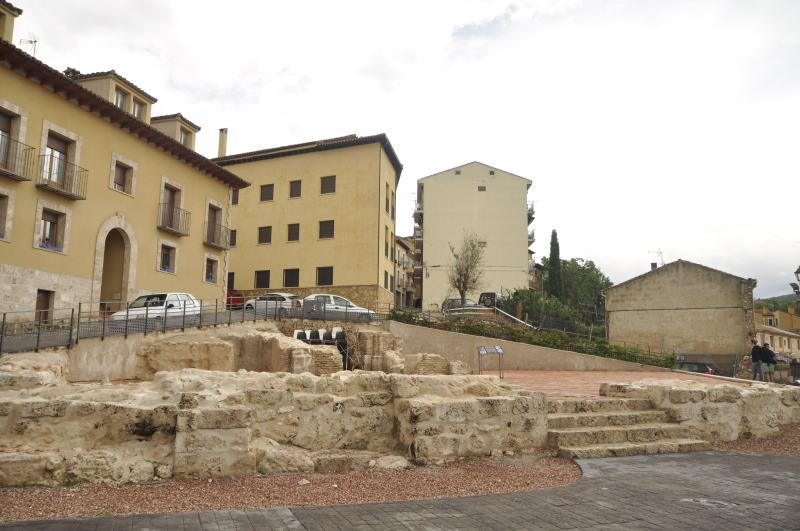 Doce Caños (Twelve Pipes) Water Source: of the numerous water sources found in Brihuega, the most beautiful is this one without a doubt. Although erroneously has no 12 but 24 pipes, 12 on one side and 12 on the other.and 12 on the other. Also, it is called Fuente Blanquina. 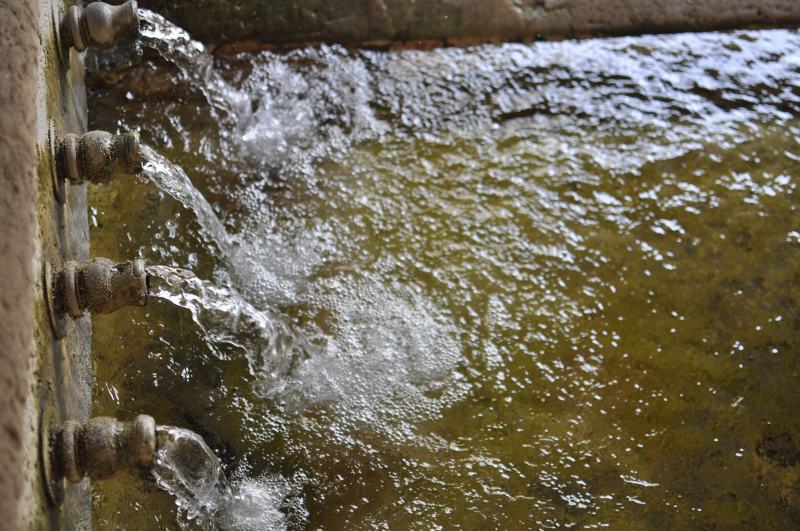 Cadena Gate: opens to the north of the town, being called in some old documents as Puerta de Valdeatienza.

Royal Cloth Factory (1787): It came to have 84 looms in which some thousand employees worked. After a splendor from 1768 to 1790, during which it was one of the most prestigious industrial facilities in the country, was sacked in the War of Independence and used its building as a French barracks. It works in 1814 and in 1840 passes to private hands following the manufacture until the Civil War. The gardens rose after 1840 with a beautiful geometric layout forming an intricate mesh of almost baroque structure. Today in disuse. It is worth taking a stroll through its gardens (2 €) and enjoying the views of the Tajuña valley. 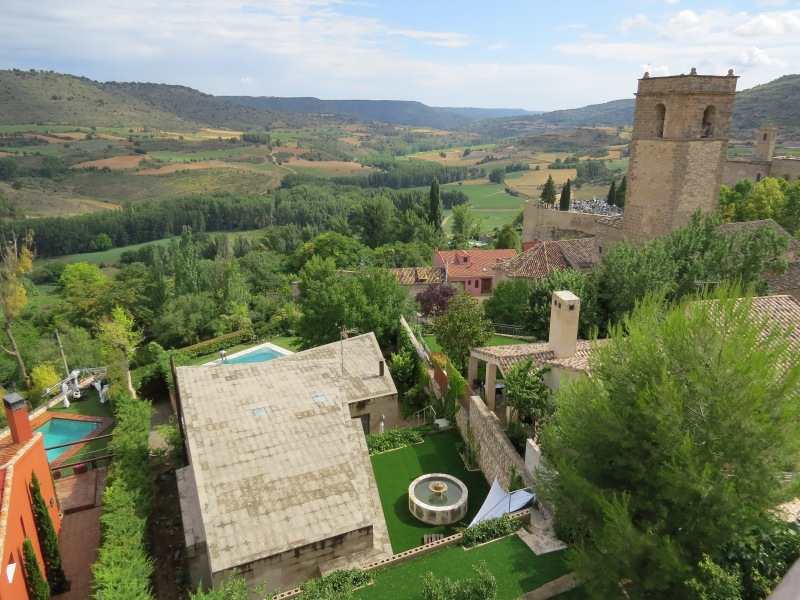 The view from the gardens of the Royal Cloth Factory

We can not leave Brihuega without discovering one of the landscapes that in recent years is attracting thousands of tourists every summer: The Lavender Fields.

Between the towns of Masegoso de Tajuña and Brihuega, the abandoned village of Cívica looks like a place taken from a fantastic film. It is a place with a mysterious, curious and picturesque air.

This recent construction, that looks like a very old village, is the work of Don Aurelio, a priest in love with the beauty of the environment, who inherited the lands where this rocky labyrinth lies. For years, he devoted himself to building this special place, fitting the tunnels, caves and passageways that had been formed by the erosion of water on the wall. The work was carried out by masons’ crews, and lasted until the 60s of the 20th century. The result: a village now abandoned that is worth discovering for its originality and for being a perfect combination between the work of man and nature.

Our day finish enjoying the sunset in the Lavender Fields, a whole sensory experience.

With the help from http://www.brihuega.es