Today is the chance for Brasov.

We started by walking from our hotel, after breakfast, to Piața Sfatului (square), passing through Strada Republicii (a street). From there, before lunch, we managed to visit: 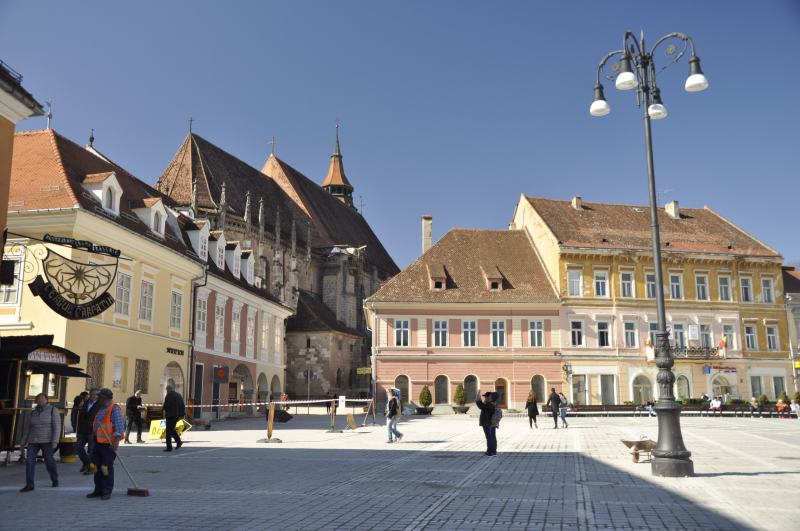 Biserica Neagră (Church) in the back

The view from Turnul Negru

The Cable car was closed, apparently the only way to go to the top of Tampa Mountain was hiking, but we weren’t prepared for that.

At 13:15 we went to get the car, had lunch in Sultan Mehmet, a Turkish restaurant (37.7 RON = 8.3 € per person), where the food was decent, but the service was the worst ever. Three of us got our meal a couple of minutes after ordering it and the fourth one had it almost an hour later…Romania really needs to work on their service. #Iamnotpickyatall

Therefore, it was almost 15:00 when we head the road, to be in Făgăraș Fortress and Catedrala Sfântul Ioan Botezătorul an hour later. The Fortress looks stunning from the outside, so sad it was closed. 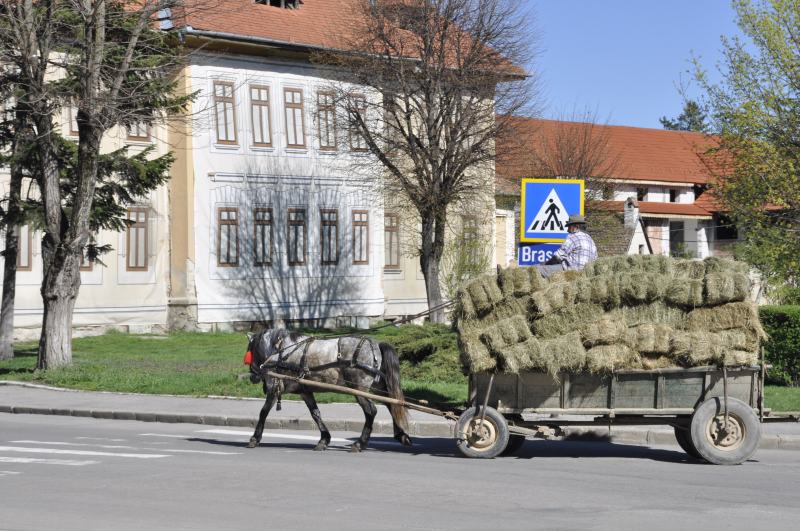 Something pretty common in Romania countryside…love it! 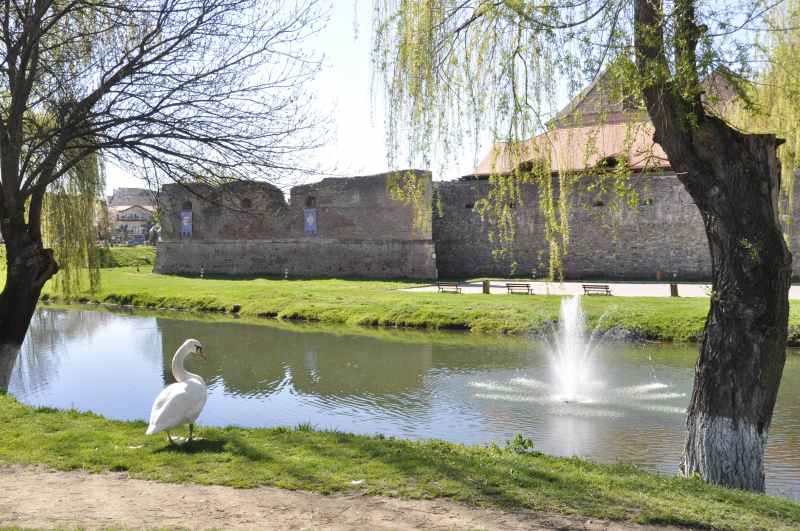 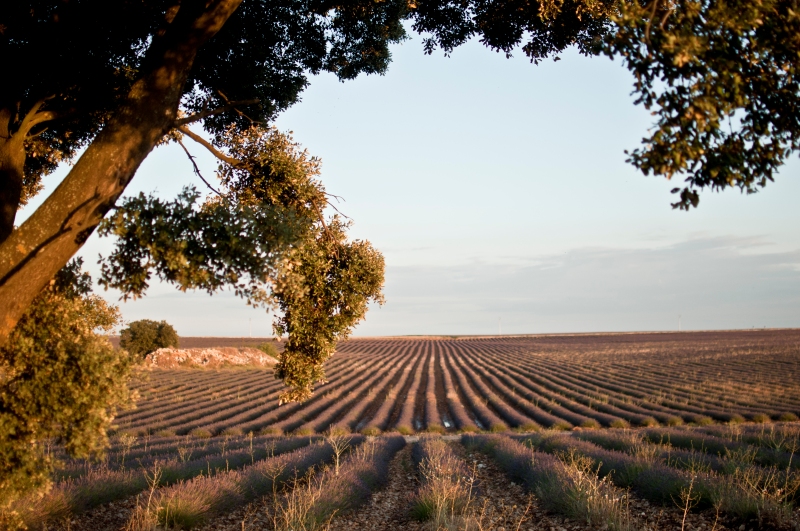 We took our respective siesta in the hotel (Casa Baciu) upon arrival in Sibiu and at 19:30 we went to Piața Mică (a square) and then enjoyed the view of the city by climbing the Turnul Sfatului (Council Tower) for only 2 RON (= 0.4€), which has magnificent views of the entire old town of Sibiu. 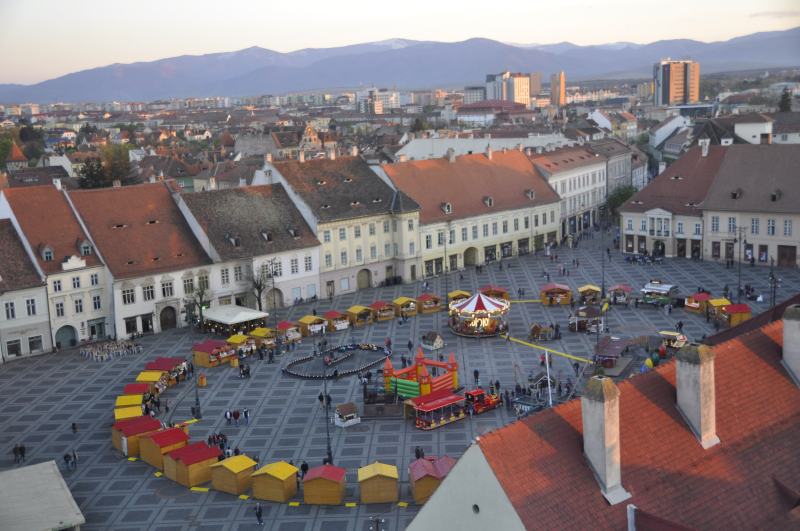 From the Council Tower

From the Council Tower

This is the point when we decided to start eating italian food…our dinner was at a pizza place in Piața Mare (39 RON = 8.6 €, including beers and desserts).

Brief history of Brasov
Fringed by the peaks of the Southern Carpathian Mountains and resplendent with gothic, baroque and renaissance architecture, as well as a wealth of historical attractions, Brasov is one of the most visited places in Romania.
Founded by the Teutonic Knights in 1211 on an ancient Dacian site and settled by the Saxons as one of the seven walled citadels.
The location of the city at the intersection of trade routes linking the Ottoman Empire and western Europe, allowed Saxon merchants to obtain considerable wealth and exert a strong political influence in the region. Fortifications were erected around the city and continually expanded, with several towers maintained by different craft guilds, according to medieval custom.
In 1688, when the Austrian army conquered Transylvania, Brasov was the last Bastion standing. 1689 was a one of the toughest years in the history of Brasov. On April, 21, a big fire destroyed most of the town and killed 3,000 people. Most of the houses were destroyed and Saint Maria Church, smoked by the fire, would become “The Black Church”. The citizens rapidly rebuild the city.
In the period following the 1st World War, Brasov became a strong economic center in Europe, but the town was partly destroyed during the 2nd World War. It was rebuilt and the historical buildings were restored. During the second half of the 20th century, the communist administration forcefully industrialized the city, bringing here workers from the rest of Romania, and determining population of German or Jewish origin to leave the city in droves.
From: a mix of http://romaniatourism.com/ and http://www.brasovtravelguide.ro/

Here is the map of our road trip again, in case you want to take a peek of tomorrow’s plan. Remember each day is in one colour 🙂

Back to “Romanian Road Trip”

Miami siempre es una buena idea ♥️ #simeganolaloteriabusquenmeenmiami
Disfrutando de nuevo de Madrid ♥️
Back “home” ♥️
Conociendo Girona y sus pueblitos ♥️ #ochoapellidoscatalanes
El verano no se ha acabado en la #costabrava
De vuelta a España, a “casa” sin ser casa. Como bien decía Facundo Cabral: “No soy de aquí ni soy de allá” pero yo prefiero quitarle el “no” y sentirme en casa aquí y allá.
Ai Weiwei (Beijing, 1957) is an artist, a thinker and an activist, whose artistic practice addresses pressing issues of our time. He is one of the leading cultural figures of his generation and an example for free expression both in China and internationally. At Serralves Ai Weiwei presents a body of work that reflects his interest in the environment and his concerns regarding the deforestation of the Brazilian Atlantic Forest. Ai’s sculptures represent what remains of once green giants and are referents for the present consequences of the rapacious conversion of the natural environment.
First dose of covid vaccine done at 34 weeks pregnant!!
Washington DC