We left our lovely guesthouse around 9:00am to have breakfast in Popas Turistic Bucovina to them drive for an hour and fifteen minutes to get to the marvelous Voronet Monastery.

Voronet Monastery
Perhaps the most famous and stunning of the painted monasteries is Voronet, founded in 1487 by Stephen the Great to celebrate a victory over the Turks. Widely known throughout Europe as “the Sistine Chapel of the East” due to its interior and exterior wall paintings, this monastery offers an abundance of frescoes featuring an intense shade of blue commonly known as ‘Voronet blue.’  The composition of the paint continues to remain a mystery even now, more than 500 years after the church was built.Added in 1547, the frescoes of this church illustrate biblical scenes, prayers, episodes of sacred hymns and themes such as The Last Judgment and The Ladder of St. John, featuring colorful and detail-rich imagery of apostles, evangelists, philosophers, martyrs, angels and demons.
Monastic life at Voronet was interrupted in 1785 under Habsburg rule. It returned only in 1991 with the arrival of a community of nuns which strives to harmoniously combine a religious life of prayer with housekeeping and farm work. The nuns run a painting workshop and provide guided tours of the monastery for visitors. From: http://romaniatourism.com/

It took us two hours and a half to get to our next destination: IASI. This city wasn’t initially in our plan, but when we realized that we would have to drive for more than eight hours from the monasteries to return to Bucharest, we preferred to look for an internal flight from the nearest city.

The flight was bought a month before the trip and the truth is that it was very cheap and comfortable. We paid only 30 euros. The only bad thing is that we had to return the car at a destination other than the pick up, and that cost us 130 euros extra.

The good part is that we had time to visit Iasi before catching our flight. We ate some pizzas after parking in Iasi and at 16:30 we started to walk around the city, visiting:

Iasi
Deeply rooted in history, Iasi has been the main centre of Moldavian culture since 1408. The city prides itself with publishing the first Romanian newspaper and establishing the first Romanian university. Today, Iasi is home to five universities.
Over the past 500 years, history, culture and religious life have molded the city’s unique character. Iasi boasts an impressive number of Orthodox churches, almost 100, most of them located in the so-called Golden Plateau (Platoul de Aur). The oldest, the Princely Saint Nicholas Church, dates from the reign of Stephen the Great (Stefan cel Mare, 1457-1504). The finest, however, are the 17th century St. Paraschiva Metropolitan Cathedral and Trei Ierarhi Church, the last a curious example of Byzantine art, erected in 1635-1639 by Vasile Lupu. Its outer walls and twin towers are intricately carved in what many think of as stone lace. From: http://romaniatourism.com/ 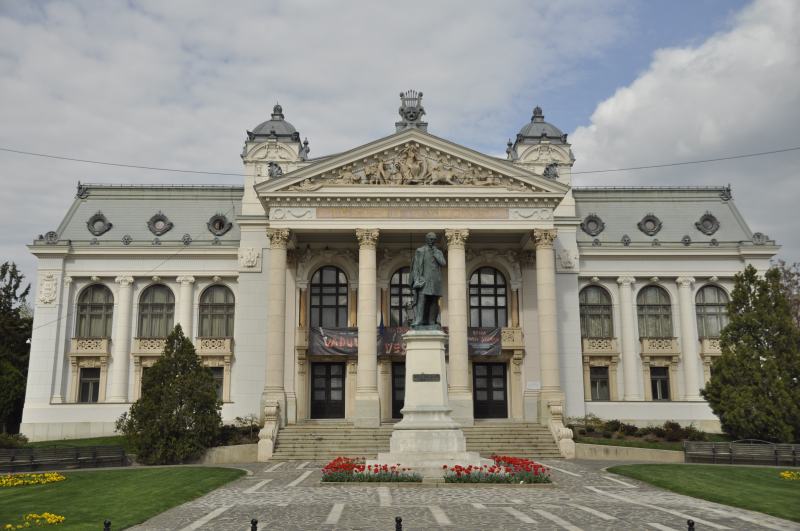 At 18:00 we went to the airport, although it was early, but we were tired and we did not have much more to visit.

We returned the car by calling the company (Klass Wagen), and they pick it up at the airport. We waited for our flight to Bucharest, while having some beers. The flight came out perfectly on time, and it included a sandwich and a drink. Pretty good for the price we paid.

Right next to our hotel we found a nice pub to have some drinks before going to bed.

Previous Post “Day 6: From Sighisoara to the Painted Monasteries”

Back to “Romanian Road Trip”